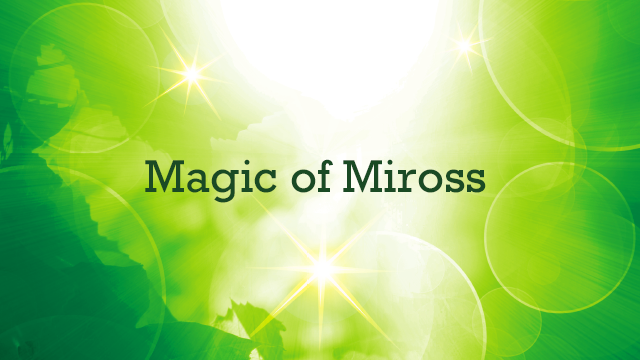 Effects of Miross – Are they miracles?

Miracles are usually attributed only to divine beings such as saints or so-called spiritual masters. Some people may experience them through faith, prayer or special rituals, but for ordinary people, miracles are considered very rare and special phenomena.
We would like to share some testimonials of those who experienced miracles in their daily lives as a result of simply applying Miross. Many have had miracle-like experiences through which their lives have been completely turned around even after hitting rock-bottom – for some, even coming to the point of suicide. Some have experienced a domino effect of transformations of family members and friends simply after just one of them attaining a certain awareness through Miross. There are people who even indicate that what they see now is so completely different that it seems like they are in totally different world or even planet. Such miracles are possible and real, and you too can experience them. Here are some testimonials among thousands that we have seen.

– He suffered from a panic disorder for many years.- He kept visiting different hospitals for support as he felt it was some sort of mental illness.
– Finally, he was told that it was depression and started taking medication.
– After that, he locked himself in his room and isolated himself from the outside world for 5 years.
Then he encountered Miross and with the application of the method, he completely got rid of his disorders. He then met with his wife and is now happily married as if his life was renewed. Recently they had their first child.

– After she finished raising her children at the age of 49, she experienced acute pain throughout her body. It was diagnosed as rheumatism, which is a connective tissue disease, and the cause of the disease has not clearly been identified.
– Her body soon began to stiffen. The medicine the doctor prescribed had some limit to its effectiveness but even when it worked, it only cut her pain in half. Her unbearable pain continued without a break and she purposely had several doctors prescribe painkillers so that she could have more pills.
– The doctors naturally told her to stop, but she didn’t. She felt such excruciating pain that she thought she would rather die than tolerate such agony.
– One day she realized that it runs in her family: her mother had died from rheumatism at the age of 58; her mother-in-law had developed the disease at the age of 55; and her grandmother-in-law had died from it at the age of 64.
Twelve years had passed since the onset of her rheumatism and she was introduced to Miross through her friend. She attended a Miross course and her rheumatism simply disappeared in an instant. She is now 61 years old, but she feels her body has been completely reborn. She now feels very excited about what kind of future she will be able to create and enjoy with her husband.
Please see her video interview: http://rossco.jp/en/testimonials/story_09.html

– When she was six years old, she lost her mother, along with the child that her mother was carrying in utero at the time. This incident completely transformed her happy family into an “unhappy family”.
– A relative took her younger brother in, and therefore she always felt incredibly lonely and empty. She was never able to combat these feelings throughout her youth.
– She got married, thinking that she could finally put an end to her loneliness and emptiness. She also had a child, but these happy events did not make her situation any better, as she suffered from repeated domestic violence at the hands of her husband.
– She finally got a divorce and left her daughter with him. The sense of guild that she had by leaving her daughter with him also was something that she could never remove from her heart.
– She could not understand why her life was filled with a series of traumatic experiences.
She then encountered Miross. The Miross system helped her to understand the mechanisms of this world and why she has experienced such pain throughout her life. The emptiness in her heart simply disappeared, as it was transformed into love. She feels this is such a miracle for her. She now lives with her daughter and they are so happy together. She hopes to share this miraculous experience with as many people as possible to help them realize that happiness is truly possible. “Now, my life is filled with so much joy”, she says.